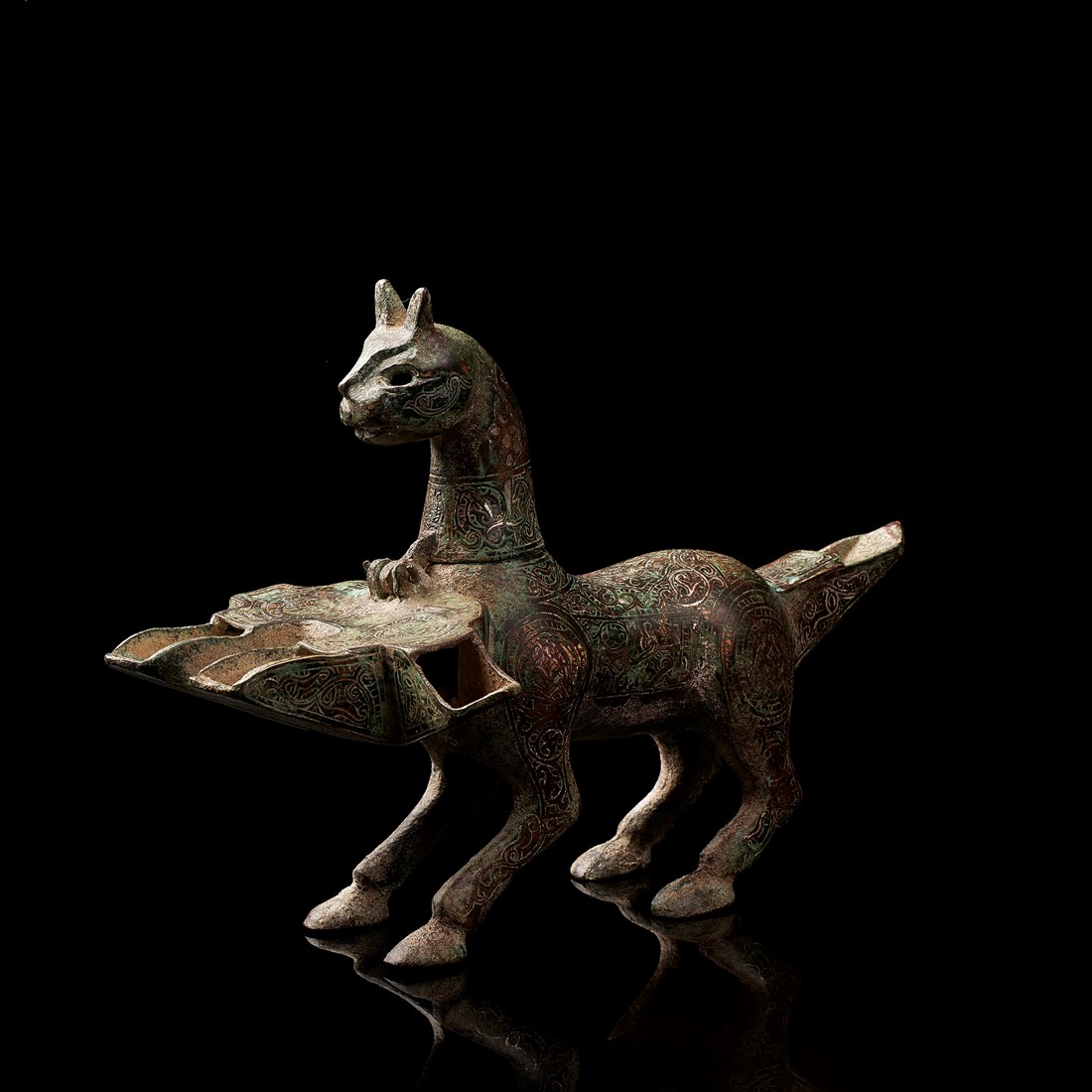 Private collection Kent, formed in the 1980's on the UK market. 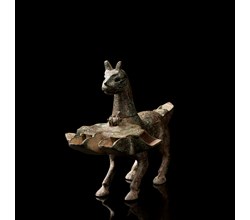 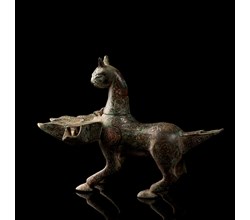 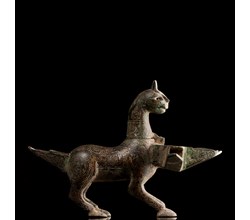 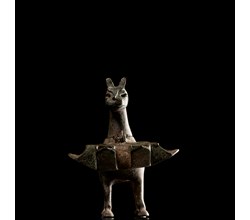 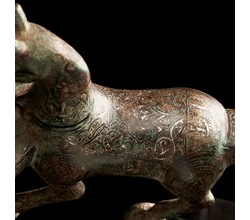 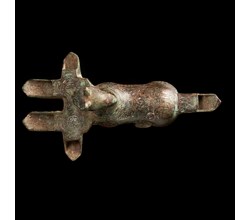 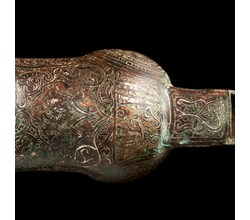 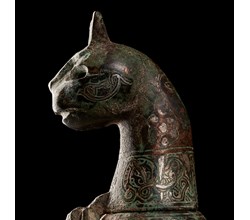 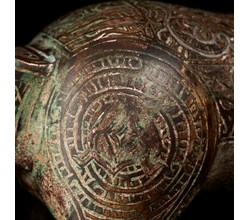 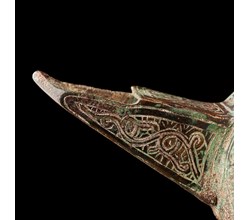 The Seljuks were a Turkic dynasty of Central Asian nomadic origins. Having defeated the Ghaznavids in the eleventh century they took over Baghdad in 1055 A.D. At one point the empire stretched across Iran, Iraq and much of Anatolia. By the end of the eleventh century however dynastic disputes led to the division of these lands. The main branch- the so-called Great Seljuks- maintained control over Iran. This was a golden age for Islamic art typified by innovation and experimentation. In metalwork one of the most important developments was the practice of inlaying bronze or brass objects with precious metals such as copper, silver or gold. Bronze casting flourished and famous workshops were established in Khorasan and the surrounding area

In the 9th century, hordes of nomadic Turkic horseman living on the outskirts of the Muslim world began to migrate westward into the heart of Central Asia. By the 10th century, a branch known as ‘The House of Seljuk’ had broken off from the Oghuz confederation of Turkomen tribesmen. They arrived into mainland Persia, and settled in the province of Khurasan. Overtime, the Seljuks converted to Islam and began to adopt the Persian language and culture.
In the 11th century the Seljuks set up an independent state under their leader Tugrul Bey with its capital in Isfahan. Initially it was under the auspices of the Abbasid Caliph in Baghdad. The arts thrived during the Seljuk period as the Turkic rulers patronized Persian culture, arts, and literature.

However, as the Arab caliph began to disintegrate, the Seljuks seized the opportunity to expand their empire westward to the Levant and Anatolia where they frequently came into direct conflict with the Byzantines. In the famous Battle of Manzikert, the Seljuks dealt the Byzantines a decisive defeat, capturing Emperor Diogenes himself, paving the way for Turkic expansion into Anatolia and the signaling the decline of the mighty Byzantines. This golden era did not last long though, as increasing waves of clans migrating from the east, pushed westward by the Mongol onslaught, coupled with Crusader armies arriving from the European west, started to destabilize the empire.

The Great Seljuk Empire was reduced to a series of smaller principalities based in Anatolia, the most prominent and powerful of which was the Sultanate of Rum. The arrival of the Mongols themselves on the Anatolian plateau in the 13th century marked the end of Seljuk independence as they were forced to become vassals to the Mongols. Despite efforts to maintain the authority of the Sultan in the face of Mongol retreat, the Seljuks completely disintegrated as a political force in the first decade of the 14th century, leaving behind numerous small mini- states most of which remain obscure, except that one led by Osman I, known as the Ottomans.
The Seljuk era was a golden age for Islamic art typified by innovation and experimentation. In metalwork one of the most important developments was the practice of inlaying bronze or brass objects with precious metals such as copper, silver or gold. Bronze casting flourished and famous workshops were established in Khorasan and the surrounding area.

A feline, (family Felidae) is an animal that belongs to the family of 37 cat species that among others include the cheetah, puma, jaguar, leopard, lion, lynx, tiger, and domestic cat. Cats are native to almost every region on Earth, with the exception of Australia and Antarctica. They are carnivorous mammals that live in a wide variety of habitats, but they are typically woodland animals.

There are a number of small sculptures in the Islamic world in the form of animals that served as incense burners, aquamaniles or oil lamps. Many of them are lions, cats or birds, often highly stylized. The animal’s shape and decorative vegetal ornamentation characteristically formes a synthesis.


This beautifully oil lamp is an interpretation of a form widely spread across
Central Asia in the 11th to 12th centuries. While zoomorphic and anthropomorphic representations were forbidden under Islamic religious law, the so-called “principle of improbability” was employed to create animals that were so far removed from reality that they could not be argued to be in any way representational of nature; thus were the strictures avoided. Unlikely animals were created by manipulation of proportions and postures, incorporation of imagined elements (or those taken from other
creatures) and flamboyant decoration using floral and abstract geometric motifs. The current piece takes the general form of a feline (either a cat, a lion or a lynx) and displays all of these methods in a technical and aesthetic way.


This rare bronze oil lamp with five spouts ( four in front, one at the back)  elaborately hand carved and with silver inlay, is an exquisite example of Seljuk metalwork. The feline itself is highly stylized, with hooves rather than paws and geometric motifs incised into its back. The neck is pierced and the facial features are deliberately simplified, with a prominent nose and whiskers. The head itself is hinged at the neck so that the oil can be poured into the hollow body. Most metal oil lamps from this period have just one or two spouts, so the inclusion of four, which project from the front of the feline’s body, and one at its tail,  is higly unusual. These highly stylised felines are typical of items produced in the workshops of Khurassan under the Seljuk dynasty (1037-1194 AD), in the eastern territories of ancient Persia.It is an extremely delicate and superbly crafted example of Islamic metalwork.

Provenance
Private collection Kent, formed in the 1980’s on the UK art market.

Damages and restorations
Usual wear and tear, corrosion. The hook of the closure at the height of the neck is missing. 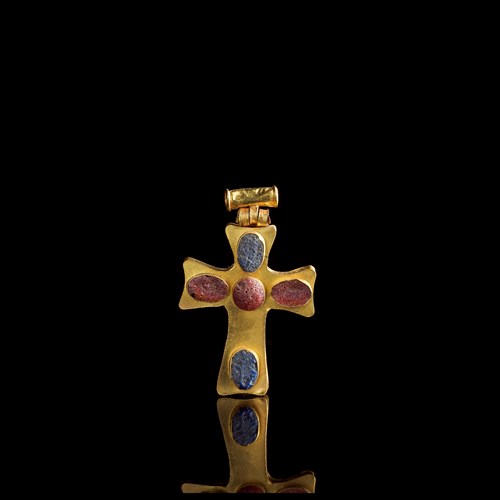 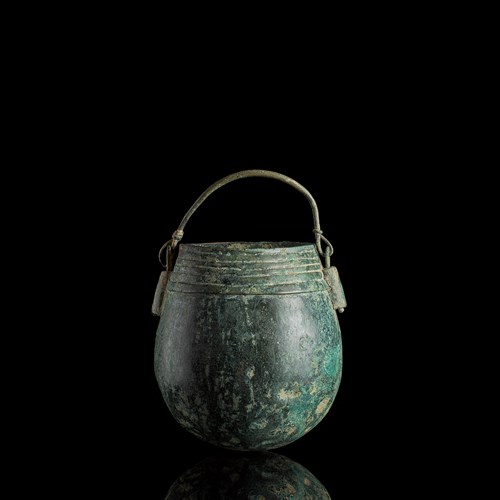 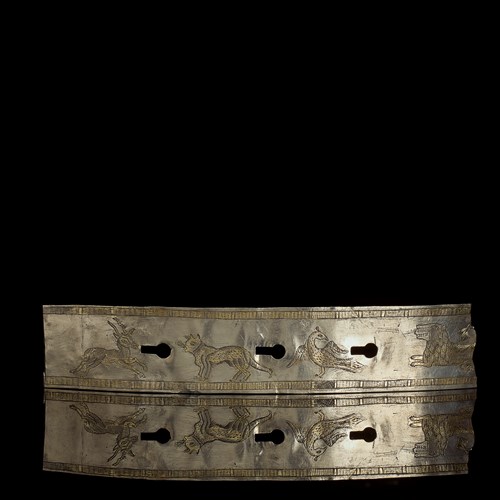