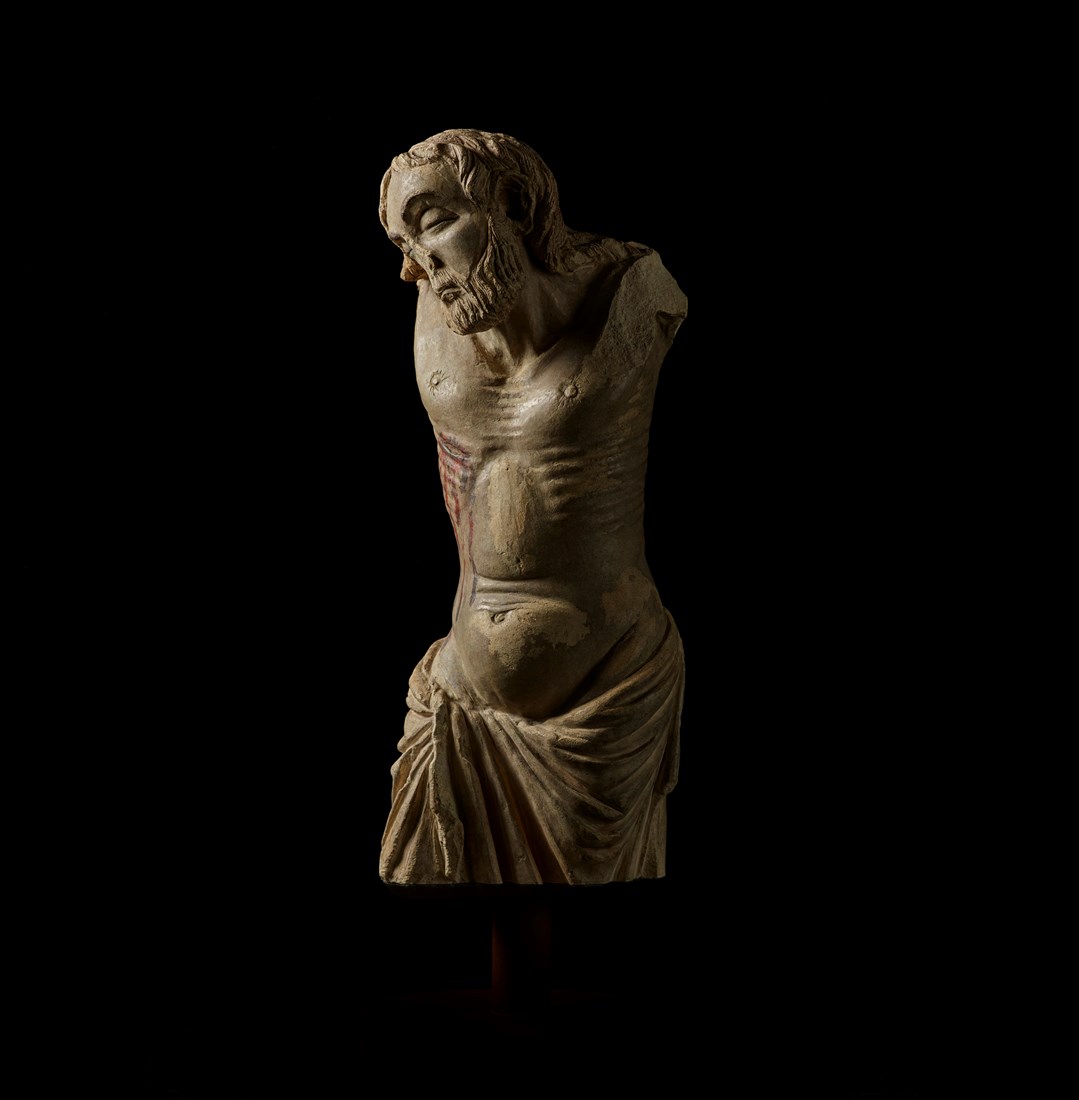 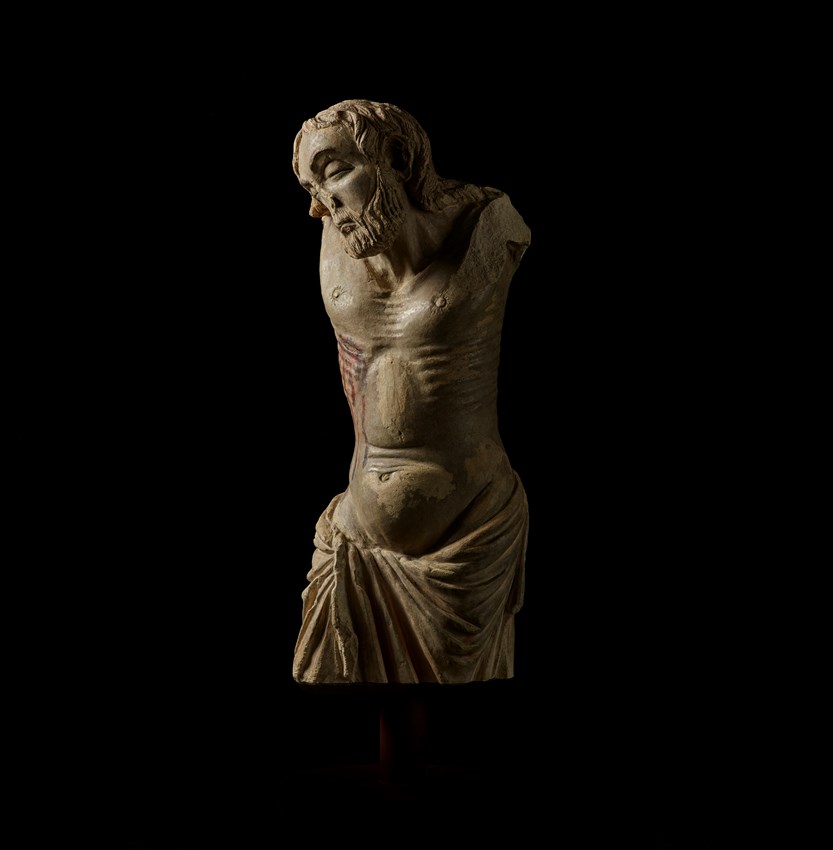 Limestone with important remnants of the original polychrome
Attributed to the Saint Anastasia Master
(Active in Verona between the end of the 13th and the fouth decade of the 14th century)
The first quarter of the 14th century, about 1320
60 x 22 x 22 cm
Export license Italy 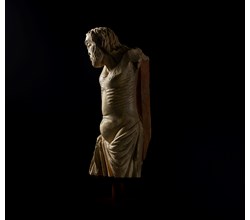 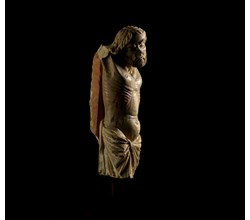 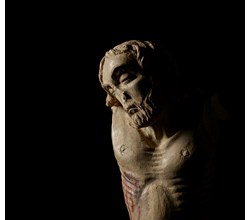 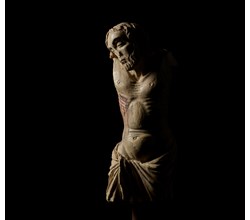 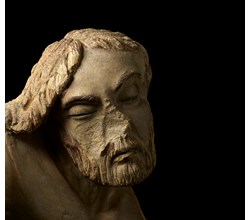 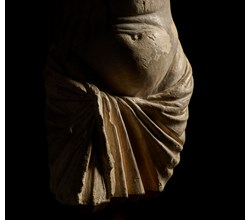 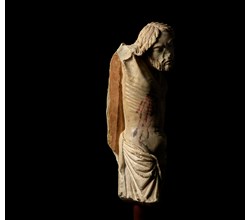 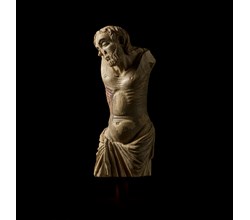 Although it is a fragment, this original Crucifix is testimony to an extraordinary expressive temperament, and it makes an important contribution to studies on Gothic sculptural production in the Veneto region. It can be traced back to the first period of the Scaliger rule and is attributable to the so-called Saint Anastasia Master, famous for being the most prominent sculptor in fourteenth century Verona.

The artist’s appellation derives from Verona’s Saint Anastasia Basilica where, between approximately 1316 and 1321, he carved the friezes on the doorway and the Gugliemo Castelbarco sepulchral arch above the entrance to the neighbouring Dominican friary (1316-1320). He must have been active some time between the end of the thirteenth century and the fourth decade of the fifteenth century, largely at the time of the Ghibelline rule of Cangrande I della Scala (1322-1329), the enlightened condottiere who established Verona as a city of great political and military importance in the fifteenth century Italian panorama. He provided incentives and court patronage for the arts to celebrate the rise of his own dynasty.
The unmistakeable Gothic style of the surviving works of the Saint Anastasia Master either still in situ or of verified provenance, show a very prolific sculptor who seemed to have a working regime that was a near monopoly, and was probably helped by a select circle of assistants. Yet it must be said that documentary sources have revealed nothing definite about the identity of this anonymous craftsman.

The language our artist uses, is highly original and is characterised by a solid abstraction of form, seen above all in the chiselled geometrical shapes and the refined curves that at times seem even to contrast each other.
There are echoes of the archaic influence of local late Romanesque work, as well as lessons learned from the Campione style being worked between Verona and Brescia in the first decade of the fourteenth century. The Master would definitely have been in contact with this during his early phase; but here we see a development which has evolved progressively, combining stylistic attributes and more disparate characteristics in a personal way. The result is a very definite mimesis with an often expressionistic appearance, aimed at highlighting the introspective dimension of the outward reality and the theatricality of the composition.
Examples of the most typical works of the Saint Anastasia Master’s mature period, roughly between the third and the fourth decade, are: the well-known monumental Crucifix from the church of San Fermo in Verona (currently it is divided between the parish church of San Zeno in Cellore d’Illasi and the Castelvecchio Museum); that of the hospital of San Giacomo alla Tomba which is also in the Scaligero Museum; and the Lamentation over the Dead Christ from the cemetery of Caprino Veronese (now kept in the Civic Museum).

One of the elements that supports the attribution to Verona of this Torso is the type of local limestone from which the sculpture is made. The diagnostic analysis carried out during the recent philological restoration (2016-2017) identified it as Gallina stone. This is known to be a sandstone much used in Veronese sculpture at the time due to the proximity of the old quarries, now abandoned, in the environs of Avesa. It is a type of stone so soft that it favours carving and, in the case of the Crucifix in question as well as in most of the great works of the Master, it lends itself perfectly to the vivid expressive finishes which give a touch of genuine virtuosity. On the other hand, this increases the risk of damage, and our crucifix has not escaped unharmed over the course of the centuries: it has lost its limbs, only the section of the cross attached to the figure's back is left, just the lower part of the loincloth remains, the nose is broken and the right side of the face is missing.


Despite this, the drama of the figure is almost overwhelming. Christ is portrayed at a moment when all strength has been totally surrendered, and is emblematic of the presence of a profound interior life. The image aims to be true to life and it is consistent with the spiritual renewal widely encouraged at that time by the mendicant Franciscan and Dominican orders. Taking into account the relatively small dimensions and the vertical break on the back of the cross, it is also likely that the Torso was originally an integral part of a votive shrine or reredos. All this makes the naturalism of the still palpable original polychrome so wonderfully amazing: a good deal of light coloured flesh has survived, as well as some reddish drips of blood which flow from the wound in the side, while some brown coloured fragments can still be recognised on the side strands of the beard and the eyebrows. The plastic modelling of the anatomy is equally sophisticated, characterised by curves and sudden furrows which create a play of light and shadow that exalts the universal values of the subject. 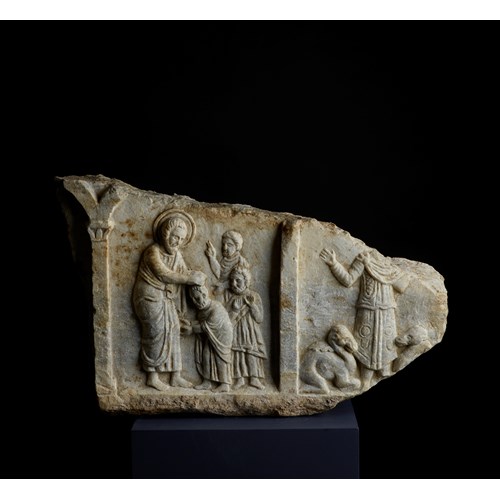 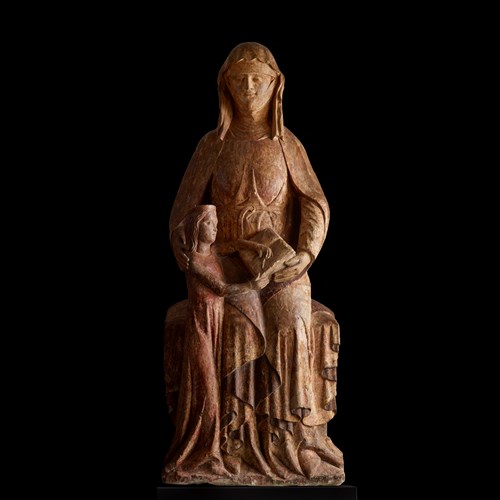 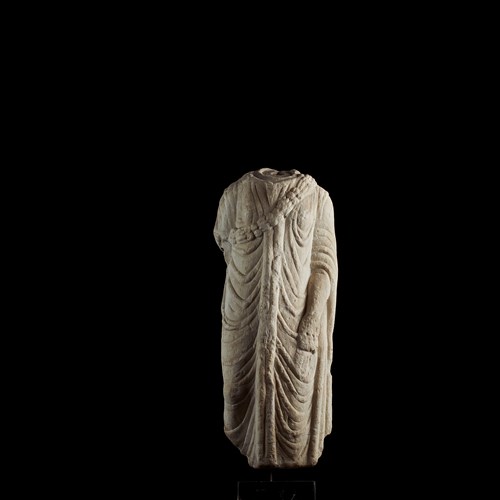 Marble torso of a noble man