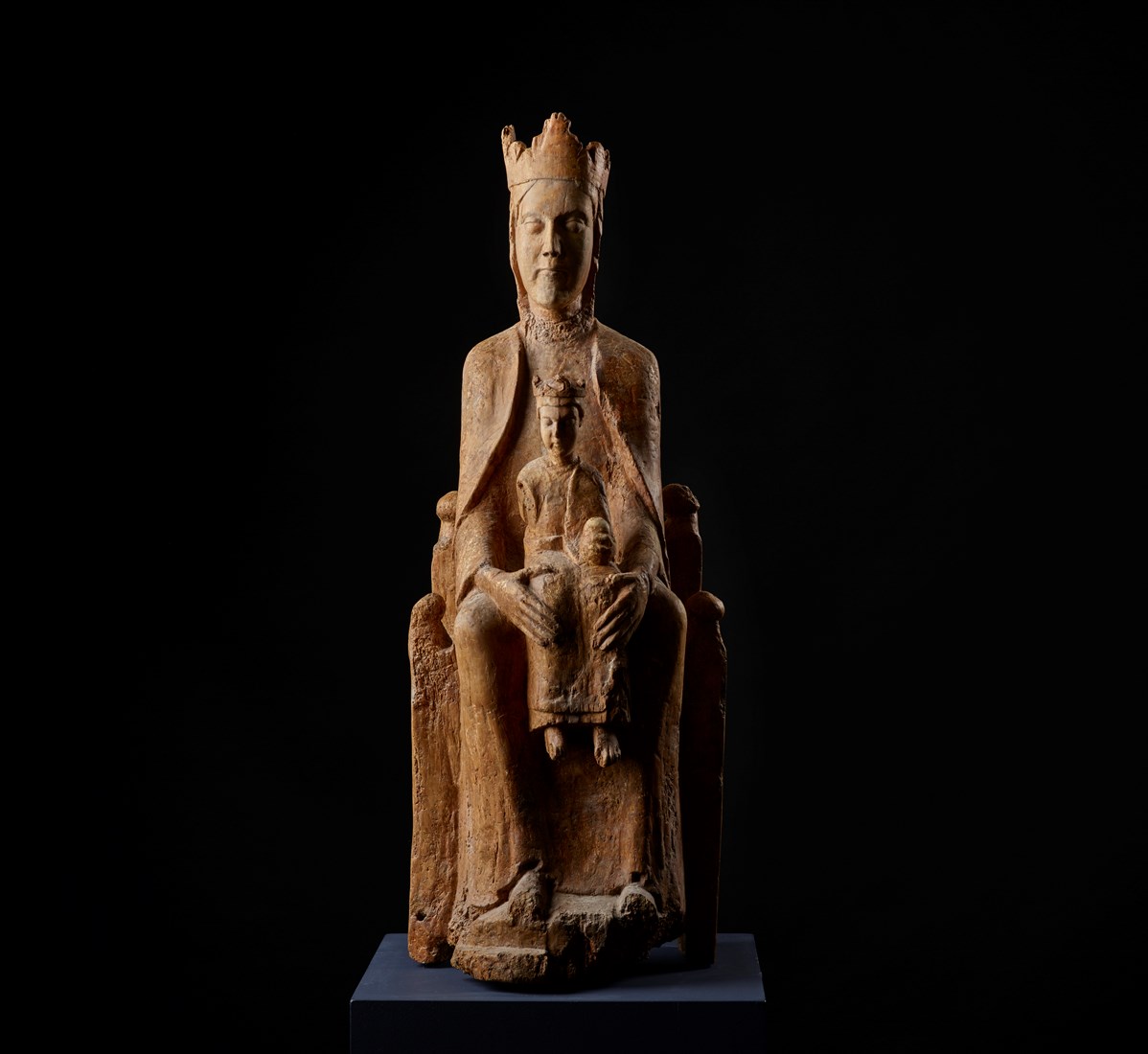 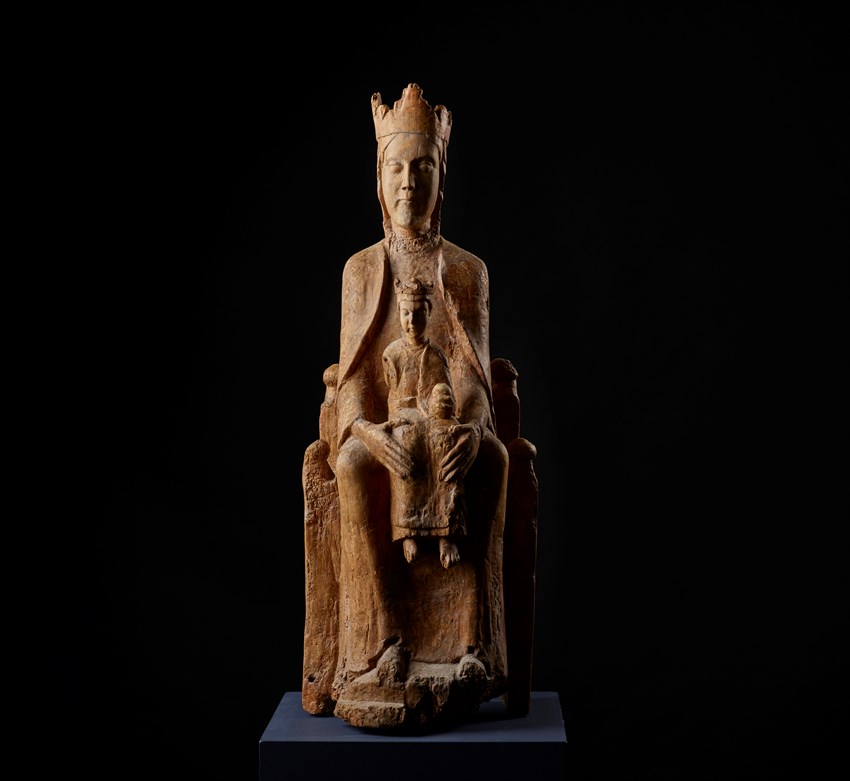 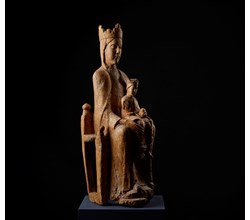 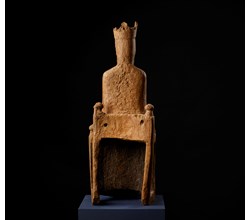 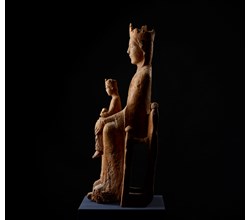 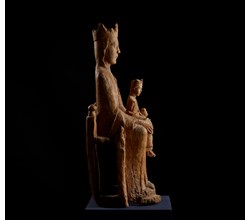 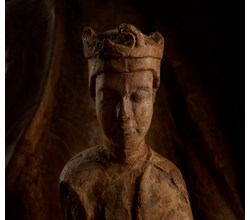 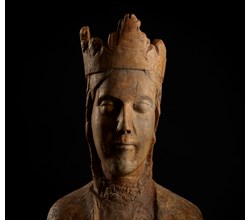 
The theme of the ‘Enthroned Virgin’, which was already known in early Christianity, knew an exceptional development at the start of the Romanesque period. After the Council of Ephesus in 431, during which it was agreed that the fact that the Virgin Mary may be called the THEOTOKOS, ‘Mother of God’, was to be included in the official teachings of the Church, this image started to appear. Before that, only images of Christ were used in churches.
The first rare large examples of separate and independent statues of the Virgin, dating from about 1000 A.D., were wooden sculptures covered in gold and /or silver.

The Sedes sapientiae (Latin for Seat of Wisdom or Throne of Wisdom) is a manner in which the Virgin Mary, mother of Jesus Christ, was depicted in the visual arts.
This designation was first used in the 11th and 12th centuries by Peter Damiani and Guibert de Nogent, to compare the Virgin Mary to the throne of Solomon. Here, the Virgin Mary becomes the bearer of the incarnation of the Holy Child.
‘Seat of Wisdom’ is one of the descriptions of the Virgin Mary in a litany of the Blessed Virgin Mary (Litany of Loreto). In the visual arts, the title refers to depictions in which the Virgin Mary, seated on a throne, holds the child Jesus on her lap, and in which she often holds a sceptre in her right hand. The Christ child sometimes holds a globe in his hand (as a symbol of God’s dominion over Creation) or an open book (as a sign of His function as a teacher).

The Sedes sapientiae depiction originally was Byzantine and goes back to the prototype of the Chora tou Achoretou [Container of the Uncontainable]. It also became popular in the Western Church from the 11th century. Depictions of the Virgin Mary as Seat of Wisdom first appeared in the Eastern religious art from the 7th century. In the West, the depiction first appeared in miniatures in the 9th – 10th century, afterwards also as a statue from the 11th and 12th century.
From the start, these statues were designated as “Majestas”, which refers to the seated attitude as a throne. Important for this veneration is the reference by Adam of Saint- Victor (+ 1146), who in the course of the first half of the 12th century remarked in connection with this depiction, about the Virgin Mary “tu es thronus Solomonis” (You are the throne of Solomon), the “Sapientiae”.

The so-called 'Sedes Sapientiae' which were produced in the early Middle Ages from Auvergne to Catalonia, and from Italy to Scandinavia, played a very important role in the West. Their importance can be compared to the role of the icons in the East. Moreover, in this type of Virgin we encounter a clear reference to the Byzantine art which influenced Western Art via Italy, Spain and the Danube.
While in the East the Virgin is always represented with a veil over her head, in Rome she is shown with a crown, indicating that she is Queen of Heaven. From Rome, the crowned enthroned Virgin spread throughout the West after the 8th century. Until the 13th century, it became the main type of statue of the Virgin.


In general, these Virgins were placed on the Altar.
They were also carried in processions, and often used as a reliquary. The enthroned frontal attitude and their inviolability due to the severe inscrutable gaze emphasise their majesty. There is no interaction between Mother and Child.
In the early examples, Christ usually sits in the middle of the Virgin’s lap. He is not depicted as a child but as an adult person. He is human and God at the same time, he sits on the lap of his Mother as a child, as God he shows us the way to Redemption.
It is only after 1200 that we see the early traces of a first ‘humanisation’, a first suppleness, the first sign of tenderness…
In the course of the Romanesque era, the mother cult of the Virgin Mary had a tremendous development. In later evolutions, the Child moved to the knee, and later to the arm. In the Gothic era, the Virgin also evolved into a standing Mother looking down at her Child with a smile.

The three elements, Mother, Child and Throne, form a sort of basic unit which makes a ‘Throne of Wisdom’ out of the ‘Majesties’.
As ‘ Sedes Sapientae’ - ‘Tronos Salomonis‘ or ‘Throne of Wisdom’, ‘Carrier of the God Child’ (meaning Christ as the new Solomon), The Virgin invites us to contemplate the Incarnation of Christ.

Here we see a so-called 'Sedes Sapientiae' with a mystical Romanesque appearance.
The Virgin is sitting upright on a simple throne, the corners of which, both at the front and at the back, terminate in a sort of column with a ball, a reference to the architecture of Jerusalem. Her arms are placed at the side of her body. We can see her two disproportionally large hands, with which she holds her Son who is sitting in the middle of her lap. The markedly long fingers are symbolic of the holiness with which she as it were surrounds the Child. This exalted idea became part of the Christian iconography from an early stage. During the Council of Ephesus (431), Saint John Damascene proclaimed the Divine Motherhood of the Virgin with the words that “her hands hold Eternity and her knees form a throne which is more exalted than the throne held by the cherubim (= angels)”.

Her two legs, visible under the fabric of the robe are slightly tapered vertically. The points of her shoes are visible under the hem of her robe.
The Virgin is wearing a closely fitting dress in a visibly supple fabric. The sleeves widen towards the hands. At the bottom of the hem, there are some subtle undulating folds. The mantle is draped over her head as a veil, which falls down over her narrow shoulders. At the front, it almost forms a cape. The crown on her head is decorated with a type of palmettes.


Christ, who sits on the ‘Throne’ and who represents ‘Wisdom’, is represented as an adult man with child’s proportions, as is usual in this period. He also bears a crown. He is dressed in a long robe which the two feet exposed. A mantle is draped over his right shoulder. In his right hand he holds a glove to represent his dominion. The left hand is missing, but it is more than probable that he made a blessing motion with it.

Both Mother and Child have an elongated oval face with sculpted eyelids and round eyes, arched bow shaped eyebrows, a long thin nose and a small mouth with pronounced somewhat pursed lips. The side view clearly shows that, in contrast to the Virgin, who is sitting perfectly straight, the Child slightly bends forwards.

The sculpture has been executed in ‘round boss’. The throne is fully hollowed out.
In the back of the throne, there are two holes. It is possible that these served to attach the sculpture to something by means of pawls or nails.

The sculptor based his work on the Byzantine Marian image type which spread from the South all through Europe from the 10th century, and which remained in vogue until the end of the 13th century.
The ‘Throne of Wisdom’ (Sedes Sapientiae) remained preserved in it, but the hierarchic stiffness has already yielded to a little more humanity.
This sculpture is still in the early Romanesque style. The vertical folds which, at the bottom of the robe, finish in small undulating pleats, which still indicates the Eastern influences. The rigid face, the typical neckline of the robe, the taut upper body and the narrow shoulders are characteristics of the style of the 11th – 12th century.


In the elongated face with the pronounced chin and thin nose, round eyes and a small mouth, the rather soft profile and the tube-shaped headdress, we can see the influence of the Auvergne. These are typical characteristics of French Virgins from the 12th century. If we also observe the rigid posture of the Virgin, the stiffness of the limbs, the position of the feet, the typical robe inspired by Byzantium, we can certainly date this statue as predating the end of the 12th century.

The combination of the soft wood used, and the stylistic features lead to the conclusion that we must look for the creator of this statue in an area close to the Auvergne and Burgundy. It is often not easy to localise a type of Sedes exactly in a region, moreover because in principle they can all be traced back to the well-known Byzantine type.

Although it has been suggested that this particular Sedes possible originates from the Pyrenees (the Bigorre region), we do see fewer similarities with the known sculptures from that region, which are coarser and which have more compressed proportions.


The combination of all these elements leads us to conclude to situate the origin of this statue in the wider region of the Massif Central. The style is characterised by a mixture of French stylistic elements and influences from the Auvergne. The crown and veil which is also a mantle, and which forms a single continuous curved line could possibly point at an Italian influence.

Origin:
France / Massif Central, 2nd half of the 12th century, soft wood
A C14 analysis of the wood was carried out by the K.I.K. (Belgian Royal Institute for Cultural Heritage): with a probability of 95.4%, the wood dates from between 1030 and 1210 AD.

Damage
Visible damage, among others to the right at the bottom of the plinth, ball on the throne, crown…
The right arm of the Child is missing.
Severe infestation of woodworm.

Restoration
This sculpture, which at some time in the past was decapitated in a very brutal manner, has been treated and cleaned by the restorer, Mrs Erica Rabelo. Intrusive old restorations (including the completion of the crown, completion of the balls on the throne...) were removed, and the entire sculpture was injected and strengthened in order to stabilise the fragile wood which has been severely damaged by woodworm.

Angel of an Annunciation (?) 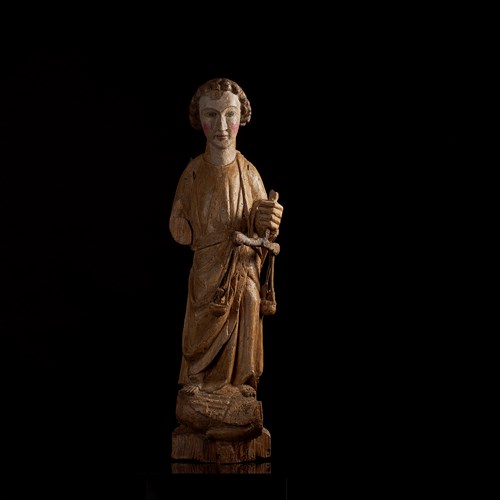 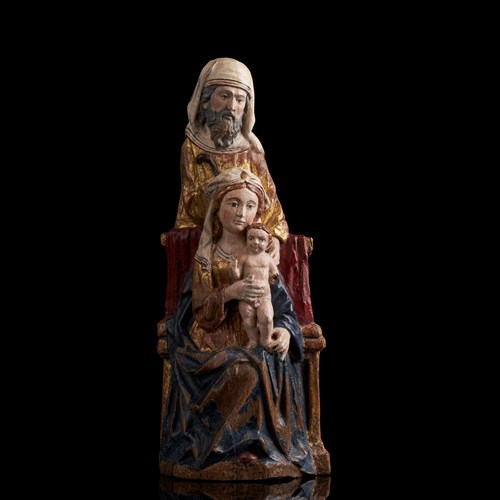